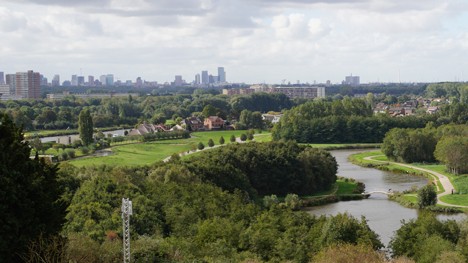 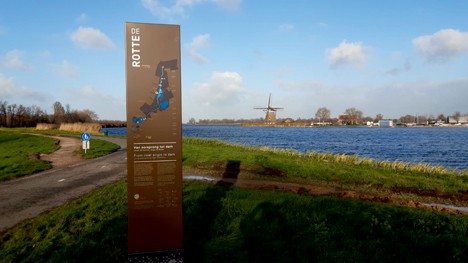 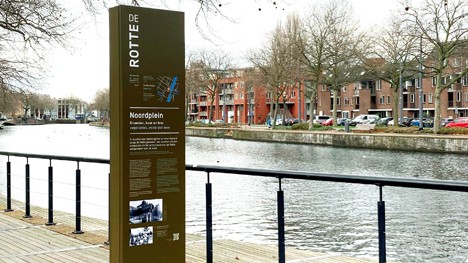 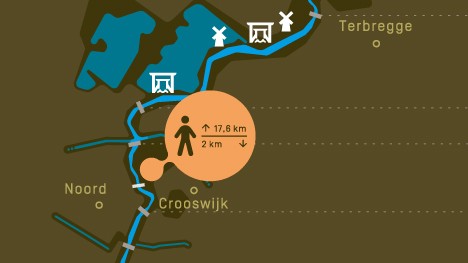 ⬤ View over the Rotte

Markings along the Rotte

The centuries-old peat river De Rotte forms the backbone of Landschapspark De Rotte. The area is located in the municipalities of Rotterdam, Lansingerland and Zuidplas. It consists of various subareas, each with its own character and use.
The wetland area has countless recreational facilities, (culturally) historically valuable places and interesting nature. From origin to dam, from the outskirts to the city centre, fourteen markings along the almost 20 kilometre long river offer visitors stories about these special places in both the inner and outer urban areas when they walk and cycle or stay along the route along the river Rotte. They help visitors get to know and experience the area better.
At the request of Recreatieschap Rottemeren and the municipality of Rotterdam, Blom&Moors in collaboration with Raakvlak design & communication designed the markings.

Design and detailing
The markings are made as slender upright elements with a solid plinth and panels on both sides that provide information.
On the A side, or map side, you will see a map of the Rotte, indicating where you are at that moment. A kilometre indication indicates the distances of the most important crossings such as bridges and ferries. The mills, the abandoned and the most important names of the surrounding villages and districts are also included for orientation.
On the B-side, or information side, you can read more about where you are and by means of text and images (photos, maps) you can get information about colourful stories from history. Of these, 14 variants have been developed.
The plinth has a water pattern on both sides, one of the house style features of the series of new elements in the area.

A coherent series
The markings are part of a series of objects for signage and information facilities for Landschapspark De Rotte. In the near future, these elements will be realised in the same visual language and with the same colour palette as the markings are.