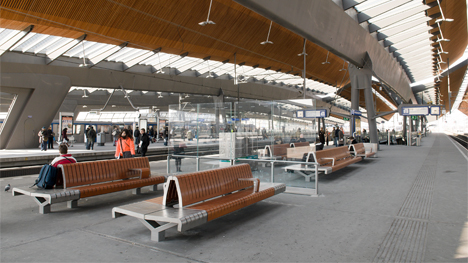 ⬤ new ameneties on the station of Amsterdam Bijlmer ArenA

In 2007 Blom&Moors was awarded a European tender for the development of a design concept for the new station amenities for all Dutch railways stations. The client is a joint venture between ProRail, NS Poort and Bureau Spoorbouwmeester.

The amenities at present are being perceived by the travellers as bleak and drab and is no longer in line with present-day wishes. The concept for the station amenities guarantees an improved image and layout of the station, and forms a basis for the design and placement of the station furnishings in both existing as well as new stations in the forthcoming 20-30 years. The aspirations are to create stations with character, which are inviting and comfortable, with attention paid to aspects experienced by the travellers.

Furthermore, with a wide network of designers and manufacturers Blom&Moors has been working on new aminities for two pilots: platforms 8b/9b at Leiden Central Station and two central platforms at the Amsterdam Bijlmer Arena Station.